Skip to content
It is almost three years since I completed school. And thankfully, I am not over it still. That tells me that I never will be, just like I always wanted. It is not that I don’t like my life as it is today, just that I still feel that I belong to Frank Anthony. I think it is essential to have a sense of belonging in order to feel complete in any environment.

I spent the later half of the 31st night going through my school scrapbooks. I look at them quite often but that night I lived those pictures and those moments again. And as always, nothing can be compared to that feeling. I’ve managed to retain all the good things from school including all the people that I liked. Some of them chose to move on and I’m fine with that too now.

I have been registered with a Yahoo! Group for my school alumni for a very long time but only recently I started interacting with people there. Most of them, so far, are more senior than super-seniors – people whose children are maybe my age. Yet, it doesn’t feel for even one moment that I am talking to someone who is old. There is such a lot of energy flowing in all the group messages and in the pictures, and just the feel of fapsdelhi is incredible.

I clicked some pictures of the same pictures today. As in, they are all stuck in my scrapbook so I clicked one more time. They’re not too clear but that’s cool. They’re clear to me. 😀 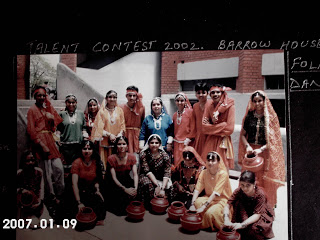 This was the first time I participated in a folk dance competition. I was in 11th. My house won the folk dance category as well as the talent contest which used to have many other events.

That’s my Accounts teacher, Mr Roy (Everybody called him Talli because all he thought and sought was alcohol) from 12th. My class teacher was absent on the day of the class photo.

This was the last Sports Day that I participated in. I had fractured my left foot two days before it but I still marched. It was the most important event of our Sports Day celebrations. We still won the cake for the best house for marching and otherwise also won while creating history when our total score crossed a 1000 points. Ecstatic was how I felt that day.

Like I said, marching was the most important event of the Sports Day. So the practices used to begin almost a month in advance. I loved giving those commands that went like, “Barrow House…by your left, forwaaaaard march!!!”

My house was on a roll those 2 years when I was in 11th and 12th. I was participating left, right and centre in all possible events. I was a prefect in 11th and the captain of my house in 12th. We made those other houses cry so much! Marginal differences in points at times, and HUGE gaps at others. We had the best debaters with us, the best runners, the best singers and the best dancers. The bestest thing though was that we were never over-confident. That was just not a Barrow House charactertistic. We stayed silent and let others do the talking. Only now I am talking! 😀

Socials was a dance party that the 12s gave to the 11s. It was more like a pre-farewell sort of informal party. LOADS of fun. This was the last dance party that I was going to attend at school so I cut the plaster that I had got on my foot just a few days before it. I paid for having done that though. Lesson: Don’t fuck around with injuries!! But what the heck… I had to dance! 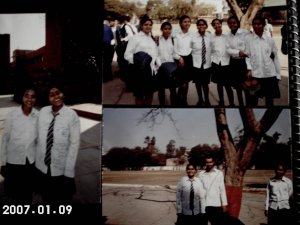 The scribbling was fun but the formal farewell that we were given before that was something that I cannot describe in words. That was the first time I related to the song “I believe I can fly”. Everybody had tears in their eyes. The tears, I think, were not because people were sad that school was over but because we got such a lot of motivational words from our principal and teachers that I think we can use them for the rest of our lives.

I just had one more picture to upload and my internet connection isn’t letting me. Bugger! 😦

Anyway, this has been one of the most fun posts to write.
The best years of my life so far… in my dearie FAPS!

7 thoughts on “The Love Continues…”