First exam in the morning was design technology. I had a daffy duck to make. I managed it decently well. Well enough to get a B-, I think. Enough for me considering my skill set.

Next exam was for a module called self study. But since it is self study, I hardly ever study the presribed stuff. But to a question about Tata Motors and their market penetration, market development and integrative growth opportunities, I wrote like I own Tata Motors. “Feel aa gayi.” 😛

Next up, I had money in my account which was not mine.

50K to be reimbursed to people. And I needed cartons to pack my stuff. So I ran and caught the afternoon bus to the city to get the work done. Swetha gave me company. The two of us were all over the place, and ended up not getting time for lunch. Got free by about 4:15 p.m., and we had to catch the 5:00 p.m. bus back to campus. We realised we were very close to Mocha that time. We’ve been quite the losers this term ‘coz we have really visited the city once in three weeks for a couple of hours on an average. Being sweaty and hassled, we looked like ragpickers with all the cartons in our hands. But we had 50K in a bag along with a big bottle of Old Munk for friends who’d instructed us to get it as well. Felt extremely funny.

I went to Mocha after several years and the happiest thing was that it was smoke-free indoors. Remember hating it in GK I. We talked non-stop about the funnest th

ings on earth, had the best of shakes, and ate good stuff too. It’s ok to splurge once in a while. But like I was joking that time, “life on the go” isn’t fun if it becomes way too literal. We could not even savour our shakes ‘coz we had only 40 minutes to spend in the place. But we made the most of it.

Tonight was the farewell for the senior batch. Since I merrily spent half of the last one month in a daze, I had too much work on me to be partying through the night. So I decided not to go. None of my friends were going either. The evening passed. And at about 8:30ish, Ritesh called three of us individually and said the corniest of things to convince us to take the last bus to the party venue. (Yes, our village always has buses to go to various places) We gave in, and then ran in differe

nt directions to dig up clothes and shoes and razors and make-up. 15 odd minutes, and we were out. And excited too. 😀

The party was fun. I was happy high for a bit. Danced like crrrazy after really long. And I am very happy to have done that. I SO needed it.

I was not carrying my camera at the time of running in the city during the afternoon. So I do not have the awesome frames from Mocha to show you. But I do have a couple of pictures from the party. Enjoy. 😀

He thought that the two were lucky to have got this photo-op. They obviously do not agree.

The naach – Robin and Ridhima

Some more of the naach – Swetha

Ritesh, the baap of all senti talk. But I think I am thankful to him for having forced me to go.

We’ve had the most inane conversations of late. Yesterday we were sitting at the edge of a pseudo balcony of the hostel, overlooking the hills in the distance, and talking of the best times of our past. We had management books open as well. 😛

They’re a cute couple. 🙂 We were wondering why their clothes weren’t colour coded today.

The third one from Jamshedpur. Soumajit. He’s been my badminton partner through many games that we managed to win. That is when I used to find time to play in the first half of the term. 😐 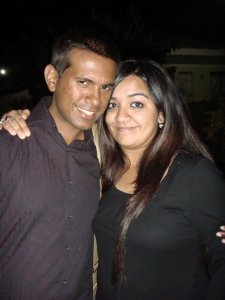 The party closed. Robin and Priyam made the final pose.

I just realised I have the whole of Jharkhand in these pictures with me. Swetha’s also from Bokaro. 🙂