Today was one of those days when I was all happy-jumpy without a reason. But shitty mood for two days was actually reason enough to be like this. So while I almost danced on my treadmill in the gym (there was music!), I also finally went to Qutab Minar. This trip was long overdue. Bad weather, non-existence of a good camera, lazyness being some of the factors for the delay. In fact, I had once earlier managed to go but was precisely five minutes late. The place shuts at sunset, and apparently that had already happened when I reached. Anyway.

So today I kept an eye on the sun throughout my little journey to Mehrauli. I thought it would be touch and go, but the guy at the ticket counter said that there’s still at least another half hour to go. So I got comfortable. But this trip was unlike all my previous such outings. Shortage of time, the eagerness to take pictures, and a strange layout of the place made it a very weird trip. I didn’t know where I was moving and what I was doing. The only thing I do remember, and probably a lot of other people would also remember is me running. I used to see the sun setting next to the Minar from the main road almost every day. And a picture of that was high on my agenda today. Last I saw the sun, it was still quite high. So I started wandering around. A few minutes passed and I realised that the sky was orange and pink. The sun ought to be setting. Where is it? Yeah, I know it’s in the west and that is where the pretty rays are coming from too, but I don’t see it! Where the fuckin’ hell are you? Dude I can’t see it. Uhh…kidhhaar? Phew! I went left, I went right, I walked out. I didn’t see the sun. I couldn’t get the frame I was dying for. Finally reached a point near the parking from where I could have seen that setting sun. The pani-wala confirmed that it is visible from there every day. But what do you know…I was again late. And maybe by not even five minutes this time! Pff! 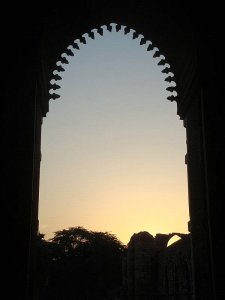 You can see the tinge in the sky too? 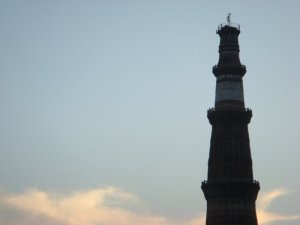 Anyway. Did manage to get a few shots that I like. Did not like the place much. The Minar, of course was breathtakingly beautiful. But the surrounding area was okay-ish. I’ve seen better places. But I am glad to have finally visited the place. One more off my check-list. 🙂

The rest of the pictures are on my Flickr page as usual.
See you around! 🙂