Skip to content
I was busy at work, and thought that things would ease out once the project is over. I never realised when that project was closed and when that month passed me by. I am again in the same place, and have a feeling that weekends will never be the same again. Of course, a doubt about my productivity level makes things worse. But for now, I am only trying to race and catch up on sleep.
For the record, the last few weeks have been about this:
An official trip to Odisha and Jharkhand. I prefer Orissa to Odisha.

Bhubaneswar has tribal and folk art work done on almost all walls in the city. I loved it!

Between many meetings all over the city, we got some time off and a colleague took us to the Udayagiri Caves. It was hot and humid, I was wearing heels, and suddenly felt that carrying the camera might have made sense. Good thirty minutes.

I am still wondering how many people must have sat on this elephant in the past 1000 years. I saw four in a span of five minutes.

The night that we wrapped work in Bhubaneswar, I got a brainwave. Our flight next morning was scheduled for 8 am, but I wanted to make a trip to Puri or Konark early in the morning. Anand agreed. We got two hours of sleep that night, and managed to make a speed trip (starting at 3:30 am) to Konark.
The sea makes me happppyy!
The thought immediately after seeing the sun rise – “Watching the sun rise is the fiercest, most incredibly positive feeling in the world”. And this one was over the sea…. 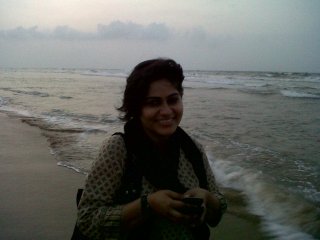 ….I was zonked, but bloody happy! The Sun Temple was a few minutes away from the beach. We had exactly 15 minutes to spend there and I was happy to capture the place in my mind with just that one round in there.
We had first stopped there when we reached at 5 am. But the temple was closed then and we could barely see anything. 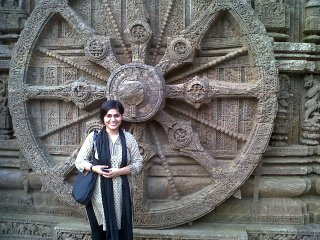 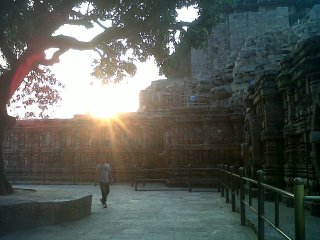 A few hours later we were in the Land of Coal, Ranchi. Before that, the stopover in Kolkata (I still prefer Calcutta) was fun too. Subhadip was nice enough (as always) to come and meet me at the airport. Some coffee, chocolate truffle, and lessons in Bengali pronunciations later, I was back on a crappy Jet aircraft to the hill station that used to be.

Soumajit also happened to be in Ranchi during that time. Saw him after about 1.5 years. The boy’s always been pleasant company.

It was a productive trip. We managed to achieve what we set out for. And I managed to socialise, shop, AND travel. 😀

Now (almost) all my time gets spent with some of these guys. The Government of India is pretty much at the centre of  my (work) life. And the office has become home (because Father now calls me a guest). 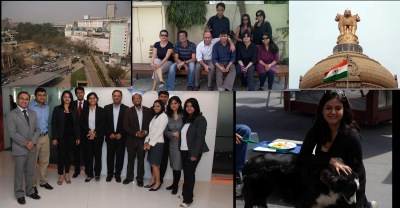 One day I decided to take it easy and take the girls out to one of my favourite places in the city. Long Island Iced Teas and Cosmopolitans made the night very exciting. More on that here.

I also received a beautiful bookmark and some more trinket from Kausik. He was thoughtful even during a crazy trip to Thailand. And he’s not known for this kind of stuff. Twas nice of him! 🙂

The newest health issue? Vitamin D. I have none of it.

Next stop – Mumbai. The plan – land, work, fly back. No scope to meet any friends. Will miss the Bhai-Bhabhi’s anniversary. Missed Mom-Dad’s while in Bhubaneswar. Last month Dad’s birthday dinner was also with colleagues in office. Maybe these are opportunities, not losses. I like being positive.

Until next time, tada!

P.S. – On the delayed flight from Ranchi to Delhi, we had Yashwant Sinha for company. Celebrity status in my head. Did tweet about it too. The definition of ‘exciting’ has clearly changed with time.