Skip to content
The modest start
The overnight bus journey till Manali was largely uneventful. As conscious as I was of the fact that I was headed to Ladakh, I could not think about or visualise anything beyond the view from my window. Gradually moving out of Delhi, out of the spaces that I do not even relate to from my South Delhi life, the bus gathered pace and I moved into another zone with my music. There is something about moving along at a constant speed and watching highway lights in the dark. It calms the mind like few other things can.
I was up after barely 2-3 hours of sleep. And this time the view had changed to lightning and rain. And the highway roads had changed to hilly winding roads. That was a rather unsettling environment. For the three summers that I had been planning this trip, the only factor for keeping early-June dates was rain. And goes without saying that the pessimist in me reacts first in such situations! So there was no question of sleep again. I endlessly wished (almost prayed, I think) for the rain to stop. It did by the time our supremely late bus reached Manali. The sun rules!
The expected nightmare; only worse
For some strange reason I was never convinced that stopping in Manali for a night would be a more efficient way of moving ahead. I didn’t believe that it won’t change the number of days required to complete the trip. I was clearly wrong. And I realised that only two days later.
Marhi, where Swetha and I had breakfast last year, was completely different this time. While last time it was bustling with multiple eating joints, shops selling expensive accessories, hundreds of cars, and even more number of people, this time it was deserted. There was no sign of any shops or restaurants there. We just about spotted a gorgeous face selling Maggi from the back of an Alto. And a couple of guys who were selling bhutta. That’s all.
Getting to Rohtang top? I expected a traffic jam, but since we were late, we faced incoming traffic on what could not even qualify as a single lane road. We had obnoxious people trying to overtake us. At one point we were made to stop right where a landslide was expected. Snow seemed to be shadowing the road. And it took us about four hours to get out of the traffic jam. 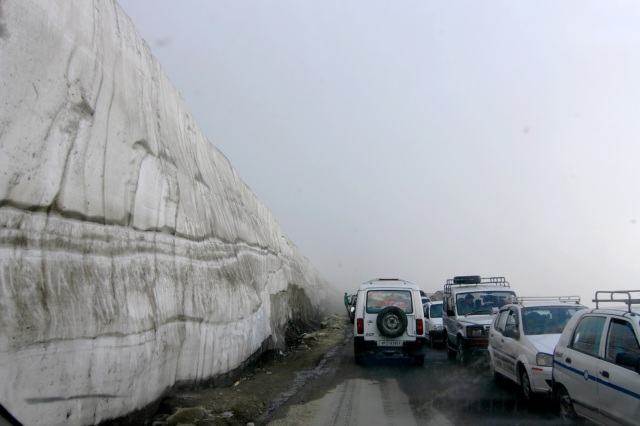 Having been on the road for over 24 hours, my body started asking for a break. Sunset in Lahaul Valley was beautiful as ever, but I was beginning to feel sick. And by the time we reached our guest house in Keylong, I thought it was the end of the trip for me. Closed the 29 hours on the road by puking my gut out.
The known terrain
I went till Baralacha La last July. Even though that was almost a year ago, this time it felt like I had experienced the place just yesterday. I knew the turns. I knew the place. Until I saw the amount of snow I did just before Suraj Taal. That was new. And I had so many visuals to compare. The browns with the white, the blues with the white, the colourful flowers of last year with the white! There was so much snow that my camera couldn’t even capture the contours of the different mountains. Suraj Taal was half frozen too. I remembered where Swetha had parked herself on a rock last year. All that was white. Pristine white.

The stunning scenes
One of the reasons why mountains are considered majestic is because every turn brings something new with it. I can guarantee that the world’s best descriptive-writing cannot do justice to what I saw that day. I remember a river flowing on the other side. Snow had begun to melt and there were zig-zag trickles down otherwise brown and green mountains. In some places I saw a frozen top and heavy flow of water right underneath. The sky was becoming bluer by the moment. I had to take off my blue-tinted sunglasses to be sure of just how blue the sky was. Imagining faces and shapes in clouds was a thing from childhood. Here I was seeing everything from dinosaurs to old men to peacocks to panthers to you-name-it! Most rocks were barren but surfaces changed from uneven to smooth like one could go sliding on them. The only sign of habitation was of the army. It was sunny. It was cold. It was so dusty that I couldn’t feel my fingers anymore. My palette could only taste dust. But nature had taken over completely. My camera and I were trying hard to keep up. 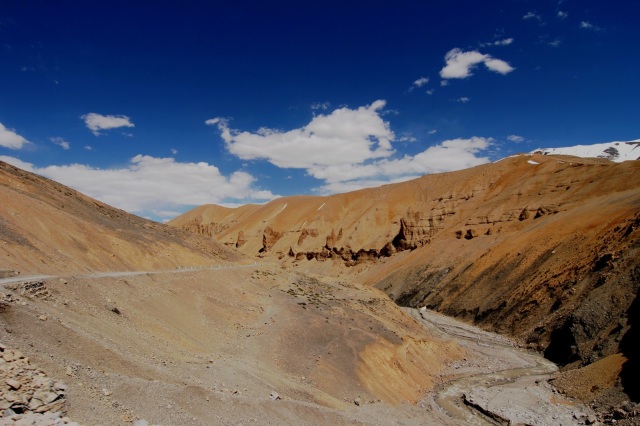 Overjoyed
After Pang, I sat in the car nonchalantly, focusing on the way the sky was opening up. I did not know we were hitting More Plains. I had read about it, I had seen pictures, but was I in for a surprise or what! The car was speeding. The past few hours of barren landscape changed to green patches, clearer skies, herds of cattle, and a big civilization of clouds. The grass was greener on the other side. Again I wished I was biking through that place, not looking at only one side. Right then my Shuffle threw up a song which I had barely noticed before. The view, the wind and the music placed my dreams and my freedom right in front of my eyes. It overwhelmed me. The tears didn’t make their way out but I felt my soul cry out in happiness. Or something like that. I do not think I had ever felt like that before. Or if anything else has the ability to make me feel like that. 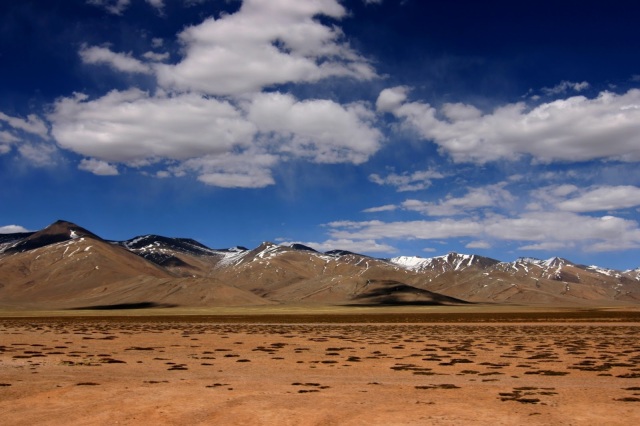 Water delights
I was always very keen on seeing Tso Moriri. The more the water in a trip, the happier I am. It is a simple phenomenon. And because we were going to Tso Moriri, we also got to see Tso Kar, Startspuk Tso and Tso Kiagar on the way. We named Tso Kiagar Chhotu Tso because nobody knew the name at the time. I cannot write enough about how excited I feel when around a water body. From oceans to ponds, it is always something magical.
Tso Moriri is at an altitude higher than 15000 feet. I knew it was going to be our coldest night. My body didn’t like the idea of being there. But how could I have missed that pink sunset over the lake! Or the lightness I felt just by spending some time by the lake even though the previous night was exhausting to say the least. I was beaming when we crossed Chhotu Tso in the morning. Such was its effect. 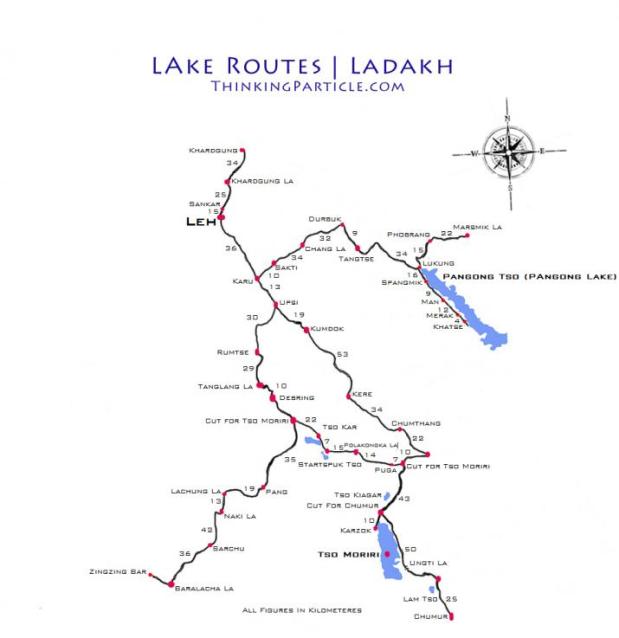 It finally sunk in
While we saw the ‘welcome to Ladakh’ signs much earlier, for me, it sunk in when we were a couple of kilometres outside of Leh. I was sprawled in the backseat of the car at the time. Touching the window glass was the best that I could do to feel the realness of the place, of being there! Finally! I was in Ladakh. Oh my god, I was in Ladakh! All the people who have been saying that I don’t smile anymore should have been there.
We zipped through into the city. It felt as if I entered an inhabited land after ages. It felt good. 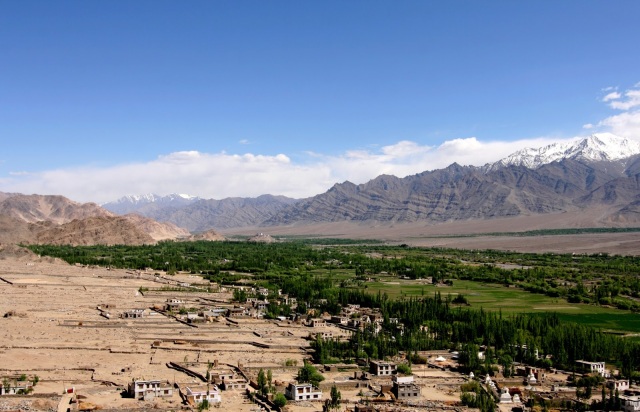 For the record, by then I had seen mountains in white, green, brown, fawn, purple and red hues.
The magic of Pangong!
I am glad we did not skip it, which we were considering at one point. The weather was rough and the roads were rougher. The drive wasn’t long, but it was cold and all the landslide stories I’d heard were easy to identify with at the time. On the way we saw a board according to which we should not have been there at that time of the day. It started with rain in Leh and became snow at Chang La. And our driver was jumping about in a t-shirt. It was summer, after all! In essence, getting there was hard. It was raining even at the lake in the evening. I chose to look towards China just to avoid some cold and painful hits on the face. I missed the sun. 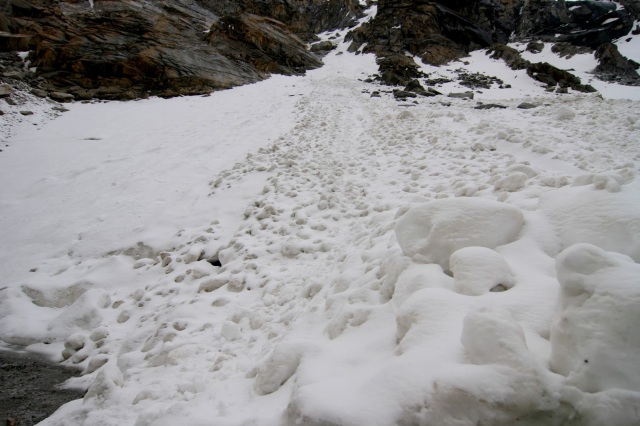 The sun played hide and seek in the morning. Its presence was comforting, not just physically. The waters were relatively peaceful. It was good to not have any people around (unlike the previous evening). I think the water felt the noise people were making. And that’s why I sat still by the banks. Stillness is hard to deal with in the city. There, it was priceless.

As soon as I turned to walk back to the inn, the sun popped out again. I turned around, in obvious acknowledgment. We exchanged that passionate glare. I was contented.
The drive back on the same route was pure ecstasy! We had clear skies for most part. The clouds were again cottony. My camera and I hung from the car window – doggie style! 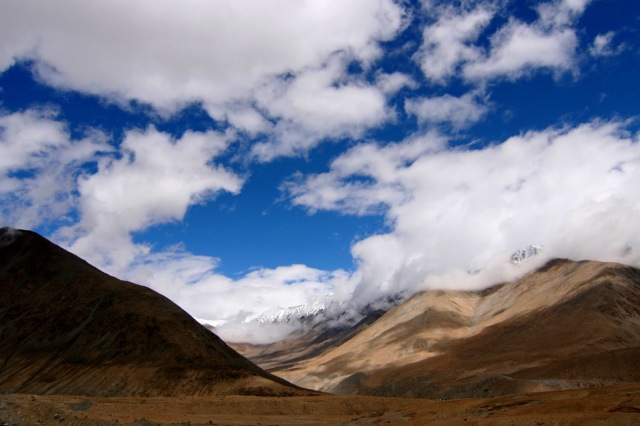 Movie reel
As we left Leh for Kargil, the empty velvet roads and mountains on both sides seemed to come straight out of a movie. There was nothing to say or be in awe of after all that we had seen. But when wind was the only sound and the smooth splendour of the drive was there to indulge in, it felt peaceful and perfect. If only there was a convertible Mercedez and a hero to drive with! 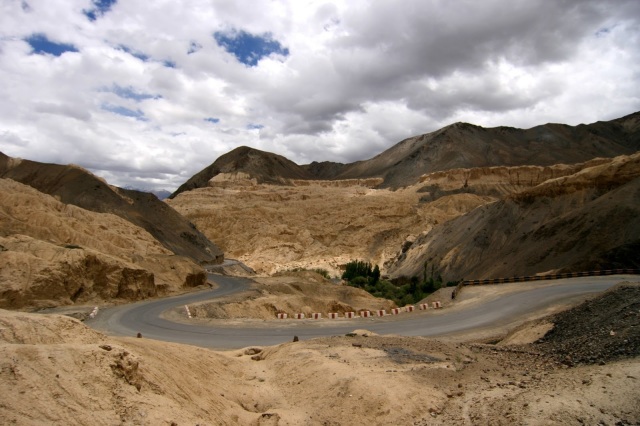 Unreal
The last leg of the drive to Srinagar was wet and cold. It rained all along. The landscape had changed to lush green. Cotton clouds had made way for the misty ones that flirted with snow-capped peaks. The mountains there gave an impression that they had a civilization settled in them. The oak brown background seemed to have some black paint all over it. It was literally like art work on the canvas. So completely engrossing and enchanting!
I did not click any pictures of a lot of these views that I have described above. I guess I don’t need to spell out why.
PS – I have never taken longer to put a post together!

9 thoughts on “Ladakh: Take My Breath Away!”