Skip to content
Our Drivers
We completed the journey between Manali and Srinagar in four different cars with four different drivers. From Manali to Keylong, we were with Namgyal. He was stylish, outgoing, god-fearing, and a safe driver. But very low on confidence. Sitting next to him through the drive, particularly at Rohtang, didn’t feel too great.

At Keylong, we switched to Jimmy’s car. He was Namgyal’s mentor, the big brother. He was cool, had every single dhinchak hindi movie song you can imagine, smoked at every opportunity he got, took care of all our needs, sang well, entertained us, and wore the coolest tee that read, “I hope there is an after life so that I can waste that too”. He got the girls two litres of chhang too, the local alcoholic beverage. He was with us on the Keylong-Tso Moriri-Leh leg.
In and around Leh, we drove with Kamal. He was reserved but had the nicest smile. He was even safer than the first two drivers and that worked well for us because passing through Chang La on our way to Pangong Tso was not easy. The weather was bad and the roads were worse. Oh, and his car had a ghost DJ. Poor guy tried hard to fix the system but some loose wires led to repeated switching of songs every couple of moments. Some of his songs drove me nuts too, but that was not a matter of choice for me.
The last leg between Leh and Srinagar was covered with Iqbal. He was a relatively elderly man who had children back home. He seemed to have driven around more high maintenance passengers in the past – he turned off his music when he felt it would disturb us, stopped at points which made for good photos before anyone asked him, and shared some interesting trivia at regular intervals. Milan sat with him in front when we were crossing Zoji La. Apparently he did not induce any confidence in her with his antics. But he brought us down safely. Our lives were literally in his hands through that steep and slushy slope. I also happened to drop my phone in his car and he was kind enough to return it in time.
Whether it was Tso Moriri which was located at the back of beyond or the drive through army convoys in Kargil, at no point did I feel unsafe – all thanks to these drivers. They were half the reason why our drive was as awesome as it was.
The Girls
There was madness, quiet, maturity, and entertainment, all in good proportions.

It felt kinda cool every time we told someone that we were from Delhi, Kolkata, Chennai and Bangalore respectively. 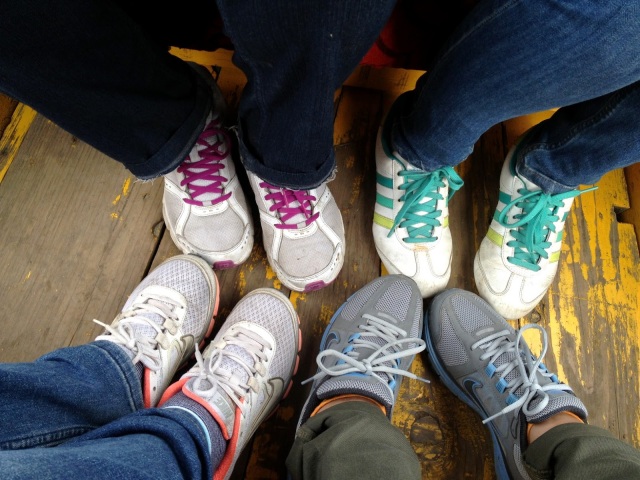 Nidhi became the boss of me every time I felt unwell and did she love being that or what! She used her design and aesthetics skills to do some sketching through the trip and I am waiting for her to complete them.
Milan clicked pretty pictures of me, nicely took over the role of planner from me, gave me company in potty issues, and made for many a perfect-sync laughter moments.
Being with Ruhi, as always, was effortless. I spent this much time with her after long and she has visibly mellowed down quite a bit. But it’s always a nice, positive feeling to have her around and I am so glad she thought she could do the trip only with me.
Prashant
Well, what do I say. He is the first person I had heard of going to Ladakh. That was seven years ago. His pictures back then had bored the life out of me. Yes, I didn’t see the handful that made it to his blog, I saw all hundreds (or thousands?) of them.
He gave me a lot of tips. He lent his wide angle lens again. Introduced me to Parvez who managed the whole trip for us. And he took more interest in my trip than I expected anyone who wasn’t travelling with me to. It was nice.

Their hospitality was unmatched. I know people from up north are all nice, but these are the guys I interacted with and it was an absolute pleasure (barring one episode which we all got over later). Javed won me over with the fresh apricot juice, and Parvez with his late evening visit to the guest house only so he could say bye to me.
The Army Officers in Kargil
Sure we were the CO’s guests, and sure they hardly get to interact with hot women like us :P, but their effort at making us comfortable, entertaining us, GIVING ME GOOD RED WINE, flirting with us, and waking up early just to see us off was well noted and appreciated. I wanted to leave them a nice letter, but handing it to them would have been too corny; so I refrained.
Swati
If it wasn’t for her plan and shout-out, I don’t know if this trip would have happened for me even this year.

2 thoughts on “Ladakh: The People Who Made It Happen”