Skip to content
The last few months have drained all the energy out of me. Work doesn’t seem to end. Negativity seems to have grown. There isn’t enough mind space to even control the mind. Mother pointed out that I have stopped talking. And while all this goes on, one day I got a craving to see the sea. Given the extent to which I have spoiled myself, I had to address that temptation. It is incredible how I let myself believe that a temptation is a need. It has its pros and cons. But I do not mind that mixed bag at all. So began the process of getting to the sea. The birthday present.
After my trips to Odisha and Pondicherry I concluded that I like the west coast more than the east. The beaches and sand quality are better. But my much anticipated trip along the Konkan in the monsoons could not work out this year. So I sought something shorter. Contemplated going to Ganpatipule, but gave up because my planned dates clashed with the big Ganesh festivities. That left me with Goa. There is something very mass-ish about Goa that makes me want to stay away from it. Cheap, I know. Especially given that I have discovered that it does have more to offer beyond the Baga-Calangute madness. But that discovery happened only after I booked my tickets.
Direct tickets from Delhi were obscenely expensive. So I wasted a few days just thinking whether I am willing to spend so much money on it. It doesn’t help to be aware that you can do a longer, more beautiful, more satisfying trip to a Ladakh with a little more money. I tried different combinations and figured that getting there through Pune could be significantly cheaper. And there is enough history (mine) in Pune for me to easily kill some time there. But the paucity of time meant I couldn’t take that detour both ways.
I finally made a decision. It was going to be Delhi-Pune-Goa-Delhi. But before I booked my tickets I messaged Karan asking if he is willing to spend some time with me in Pune. We had had a few discussions in the recent past about how a trip was due but nothing had worked out. Clearly, he is busier than me. So I thought at least one Saturday could be put to good use. I don’t know whether he felt that he’d miss an opportunity if he didn’t come with me or just that he shouldn’t let me go alone that he offered to come along despite his restraining order.
Yes, I was going solo this time. Finally. Truly solo. I had tried getting a few people along but that wasn’t working out and the sea was really waiting for me. Karan’s offer was exciting. We had the successful 2011 road trip to Wayanad as evidence. So, suddenly I had a Pune-Goa-Pune road trip happening. ‘A’ level excitement! I booked my Pune flights and gave up on all the research I was undertaking. With Karan along, there was no need to plan for pit stops or hotels or absolutely anything else.
That lasted a week. On the 3rd he told me it won’t work out. Broke my heart. And his. He had even got his car serviced. And I was back to going solo. Cost me a little to change flights and restart the research. But I managed it. I was not sure how I felt though – whether I was disappointed that he wasn’t coming or glad that I could finally take a trip alone. Nevertheless, I started from Delhi on the morning of 7th, as scheduled.
Landing in Pune filled my heart with happiness. I never thought it could feel so good to be back there, but I was truly beaming while walking away from the aircraft. There was magic in the air. Karan was waiting outside for me. It was the first time I was being received in that city. Felt good.
We went to Aromas in KP for breakfast. Fairly fancy place. It has replaced the much-loved Burger King. I had no clue – I was visiting after almost three years. I learned that the city now has big malls too. Back then, Central used to be the largest. Seems funny now. Anyway. We spent a few hours there and then headed for lunch. Yes, there wasn’t much to do beyond eating, drinking and talking. The Irish House had a warm ambience and good food. We went through my school scrapbooks, reminisced, laughed and gossiped through the afternoon. It was then time for Shudh Desi Romance. I liked the movie barring the end. Karan hated it. Typical. But we both liked the music.

After some more inane conversations and a strangely lost 10 minutes in the parking, we rushed to catch my bus to Goa.

I have known Karan for 15 years. Now we meet once every year or two. After spending those 12 hours with him I seemed to have re-developed that attachment and didn’t feel like leaving. Yes, I was disappointed that he wasn’t coming along.
So began the solo sojourn. I have done innumerable solo plane, train and bus journeys, but never travelled by bus alone at night. So I chose a semi-sleeper bus over a sleeper one simply so I stay more in control. It was a slow bus and stopped on multiple occasions. I took one break close to midnight and stayed put in my seat the rest of the time. My co-passenger was another single girl. Smelly, but harmless.
I was told to get off at Mapusa, the biggest hub in north Goa. I was to get a taxi from there for my hotel in Ashwem. Since I had no clue how many stops the bus would have before Mapusa, I stayed up for two hours trying to comprehend the conductor’s language every time he uttered a station’s name. But Mapusa is so big you cannot miss it. I got off at around 9 am and headed straight for the pre-paid taxi stand across the street.
The decision to stay at Ashwem was a result of a LOT of research for a non-commercial, non-rocky beach that was also safe and had good options to stay. I had booked myself at the pricey La Cabana because there weren’t too many places open yet and I was tired of figuring an affordable and safe place on the beach. Too many filters! I learned early that being safe on a solo trip comes at a cost. So I gave up the budgetary inhibitions and stopped bothering about what I could really do by saving 5-6K.

Taxi ride with open windows = wind in the hair! 😀 😀 It made me forget about the long and painful bus journey. We reached Ashwem in about 40 minutes. I made the driver wait while I went and checked my room. Hold on. My sea-facing villa! My happiness exchange was with the driver when I walked back to hand him the money. He saw my face and knew that I was more than satisfied with what I had seen. The sea! Ufff!! What living in hinterland can do to you!
The restaurant was even closer to the beach. I had a quick bite, dumped my bags, and went straight out on to the beach. As I walked away from the hotel I noticed that there really wasn’t anyone else there. The only people I saw were the other guests at the hotel. Some dogs started walking with me. The few cafes and restaurants I had read about online were all shut. And that made absolutely no difference to me. I just smiled and kept walking. Then came my ‘tu hi re’ moment! Know that Rahman-Hariharan number with Arvind? That! There was a massive rock going at least 50 metres into the sea asking to be climbed. And once there, how could I not have sung the song! Who cares about the ‘tu’; movie moments are not meant to be logical.
There are some people who cared and wanted regular updates from me. So I updated Karan, PK and Smita with the status and got back to the hotel. Slept. Relaxed. And then started walking out the hotel on the street. It was as aimless as it could get! Some shady people made some shady comments but fortunately, or unfortunately that matters only so much. I walked so much that I tired myself out even before I started walking back. To top it I lost my way. And 3.5 hours & at least 10 kms later I was home! In good time to hit the beach. But it was a day of bad decisions. My feet were so tired that I chose not to go towards the flat area that I had seen in the morning. I stayed close to the hotel which also had some rocks nearby. A big wave came and took me far. It was unnerving. I fought in panic, but not knowing how to swim can only help achieve so much in such a case. There were some people around but I don’t think anyone noticed. I was far above the ground. Even thinking about it is unsettling. The water did throw me back, but before I could make it far, I hit the rocks and lost balance again. And again I was floating. This time with bruises and a spasm-ing back. Came back to my room breathless and upset. One phone call and a breakdown also happened.
But I recovered in good time. The remnants of a setting sun and my camera were distracting enough. I then ordered some food and wine and settled comfortably in front of the TV.
I woke up at leisure next morning, and again went for a walk on the beach. This time with the camera! The dogs recognized me. The waves scared me a little and I stayed away. But I did go back to that big rock and parked myself on it for a few hours.

I did brave up to go for a dip in the evening. But this time to the flat lands a few hundred feet away. I slowly got comfortable and in some time was lying flat on my back. It was perfect. There were only two other people around. Some dogs were playing in the distance. The sea was calm. It touched me with ease, I tried to push work and other thoughts away, and those were my few moments of ultimate peace. 1-0-0 per cent, by the book, relaxation. 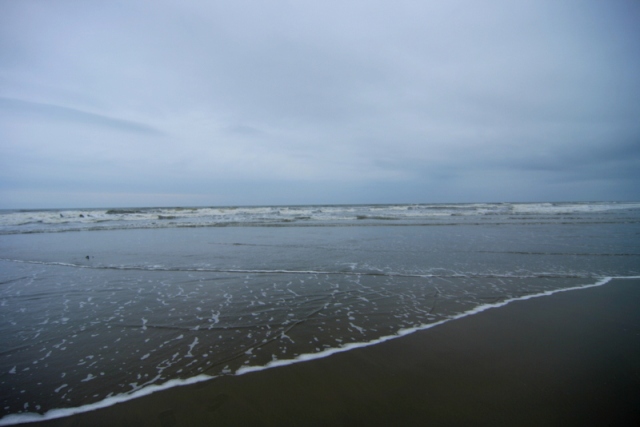 I got good sleep that night. Next day was packed with plans for my camera. Waves, churches, ruins, I covered it all! Old Goa was a complete delight. I had called Raju, the driver from day 1 to show me around and for the final drop at the airport. He was my expression of enthusiasm. Kind of made up for all the quiet hours. He took me to a shady drivers’ restaurant for lunch. Hotel Vilsha! It felt funny eating there, but the amusement factor was so high that I happily added it to my list of adventures. 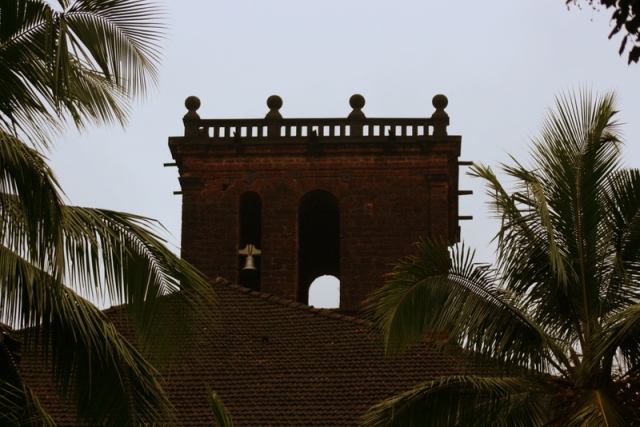 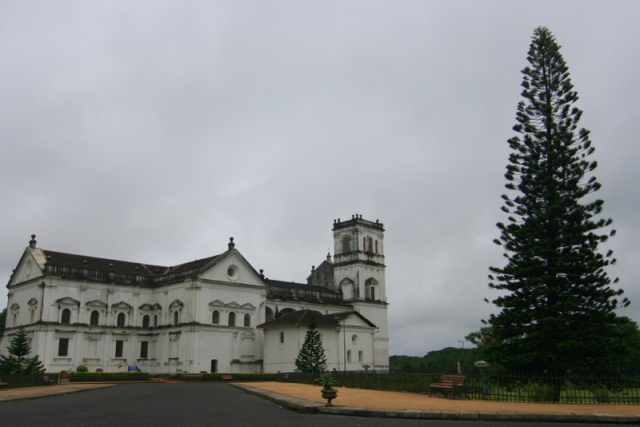 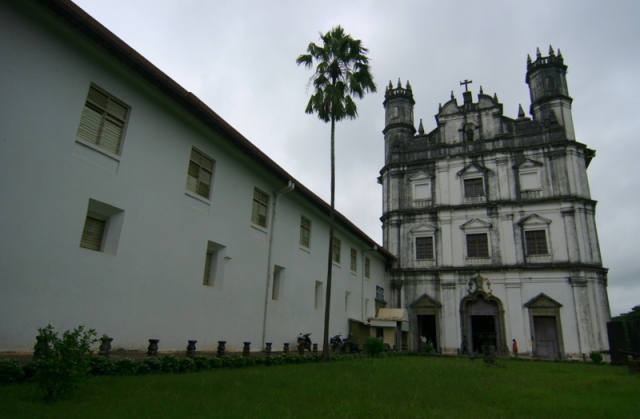 The weather on this final day was so perfect that I managed to combat the work-related anxiety to a fair extent.
I felt vulnerable and overwhelmed often enough through these four days. I was also upset about not finding some solutions that I wished to. But I am immensely pleased with myself for having done this. It started with going for movies alone. It makes one feel empowered, in control, or how Smita puts it – emancipated. I won’t lie – sometimes I do yearn for company, but that really isn’t reason enough to not do what I wish to. Nothing feels better than listening to your heart and doing exactly what it wants. It is only the heart that can take you through the best experiences in life.