Now that I am back home and have all the time in the world to write a detailed post, I shall get down to the experience called PUNE. I’m already warning you – this post might get super lengthy!

On the morning of the 23rd, I set out for the IGI Airport for my first ever flight. Nice and smooth check in, security check and boarding, and I was on DN 627 to Pune. A long queue for security check led to a delay of 30 minutes, but the pilot was extra smart (must have been on highways for a long time), he crossed the speed limit and made us reach Pune at the scheduled time, i.e., in 1.5 hours flat. Thankfully, I had a window seat. Looking inside the plane was making me sick. The take-off was not as noisy as I was told it would be. The moments when the plane was settling in the air were the most uncomfortable. Yes, the same old sickening joy ride/elevator feeling. But thankfully they were only a couple of seconds. The ears got blocked for some time, the sun’s rays were very strong, but I was all right. The landing was also pretty smooth. I clicked a lot of pictures. Did take an hour to realise that I needed to reduce the exposure by two stops, so Picasa is now helping me with ALL the over-exposed pictures, but I still feel they’re quite funky. 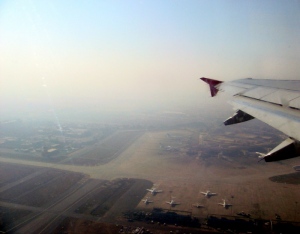 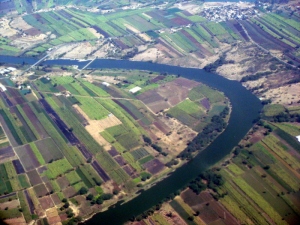 Now 23rd was the only day when I could go sight-seeing. I was not going to have any time after that. Tried finding out about the Sinhagarh Fort, but it was way too far. So this guy from the guest house offered to show us around in the nearby area. We first went to the Pataleshwar Caves. A small place, sort of a temple of Lord Shiv. But it looked more like a hangout place for students of the College of Engineering that was located close-by. So the environment was strange, and I was anyway not too keen on checking out a temple. Just spent five minutes there, and headed out.

Inside the caves
Our guide said that the next destination is also a walkable distance away, so we were on foot to Shaniwar Wada from there. This was built by the Peshwas in 1732. It is supposed to be a protected monument, but not quite protected. There was a wall inside which must have had paintings on marble, but there had been no attempt to preserve or redo those.

View from the top
Then again he said we could walk more. I was getting tired, but he kept telling me about the place in an accent that was hard to understand, but the man was being real nice. We reached an area which I was starting to think looks like Chandni Chowk when he mentioned the same himself. We were around Laxmi Road and the surrounding area. He took us to the oldest Ganpati Temple there. I was not in a mood to go in and join the rush, so I looked around for water while mom went in to say a little prayer.
We walked MORE and mom shopped for some cotton sarees. And then I could walk no more, and we took an auto back to the guest house. The autos there have the meters that Delhi autos used to have long back. The ones for which you multiply, divide, calculate a percentage and do all of that to reach the fare figure. Thank god for the simple meters that we now have in Delhi!
Two things that were common on the streets were:
# Women tie a cloth all over their head and face. Initially I thought it must be something religious, but I think it was only because of the dust and pollution. All kinds of women….across various demographic were wearing those. And man, the dust and pollution are really crazy there!! INsane!

# Bal Thakeray’s posters and images are all over the city. That’s not anything surprising. The surprising/amusing thing was that his posters were being sold on the pavements. He was accompanied by ganpati, sai baba, and the likes. Really funny!

The next day started the Symbiosis story. The admission process was combined with their communication fest, FESTOCOM. A day dedicated to each of their specialisations – Public Relations, Advertising, and Journalism. Half a day of non-stop lectures/talks by industry stalwarts. It did not matter that there were a thousand other people from all over the country there. Guests were most important, and we were not on the guest list. So it was no big deal to harass us and our parents. Make us wait like crazy and call themselves a management/communication college. So we wait to get documents verified, and the admn office has breakfast. We wait for our interview with seniors, and other seniors interview us outside the rooms with a camera and a mic and make us say that we didn’t choose MICA/Jamia over SIMC. Yes, my @#$! But the winner remains the director of this college. He was overwhelmed by the audience sitting in his auditorium, and students also on the stairs in the aisles. Maybe he forgot that the audience sat there out of compulsion. Also, to say that he was a creep would be an understatement. My recent past won’t make me call myself lucky, but I think I am. He was distributing free hugs and pecks on the cheeks (to women of course). I am so glad I did not get one. Now the reason could be that he didn’t think I was pretty enough, my assignments weren’t pretty enough, or that he’d hugged the woman who’d gone in just before me. Whatever it may be, after waiting for three hours on one day, and another three (in a queue of course) to see him, I did not want him to touch me. And his language!! It could have been thanks to the region, but I am not giving him any benefit of doubt. I did interact with a few locals and they did not talk the way he did. I was not in a cafe with him for him to say, “aaja, baith ja; kaisa laga tere ko campus?” DUDE! God made english for such days and occasions!

And he would spend half a minute on the assignment that every applicant spent day & night for a week to make, and that carried 30% weightage in the total evaluation. It did not matter that people had been waiting forever. 2 to 3 hour delay on the first day, half a day’s delay on the second, and an entire day’s delay on the third. You don’t even want to know the situation that there was on the last day. I stood in a line from 4:30 p.m. till 7:00 p.m. on day 2, got snapped at and then obviously got into a tiff with the creep’s chapdasi on the next day, and then stood in line from 6:00 p.m. till 8:30 p.m. for my turn to see the man! Wow!

The people who interviewed me! They looked like anything but teachers of a communication college. They didn’t know what to ask me, they didn’t know what consulting firms around the world do (even after being explained about it), and they just didn’t have the personalities to be sitting in an interviewer’s seat.

My group discussion, which actually had a different format, went much better than expected. I did fairly well. But I don’t think it matters. 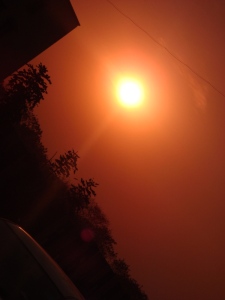 End of day outside the college building

Coming back to the fest and the lectures and interactive sessions. I mentioned some of the people that came in my last post, and they really were amazing. The common thing was that they were all incredible speakers and presenters.
The guy from the ITC group, Arup Ghosh, spoke about corporate social responsibility. I knew that they have done a lot of work in rural India, but they have done A LOT of work in the remotest of areas.
Bhaskar Das from TOI spoke for a VERY long time, but the man’s intellect, experience, creativity, all came across in that hour. It was a delight listening to him.
The next day was dedicated to journo. Sumeet Awasthi from IBN 7 publicly apologised for all the crap Hindi news channels, including his have shown in the recent past.
Right after him was Vidya Shankar Aiyar from CNN-IBN, and man was he articulate or what! He had such smoothness and subtlety in his speech, that I don’t think anybody realised that he spoke for over 45 minutes.
The third day started with Pushpinder Singh, who has apparently won the most number of Abbys. He talked about the Amul Macho, ye to bada toing hai campain in detail. It did not change my view that it was a highly disgusting ad, but it did give me a better perspective. His wit was terrific too. And being the special audience, we got to view the next ad of the campaign which is still not on air. It is much better than the first one, and quite funny too.
The fest ended with Alyque Padamsee. I had always heard that he’s a very eccentric man, and yes, he is! He rattled on for 90 minutes, but I have to say that he kept his audience engrossed the whole time.
In between came two guys who recently started an ad agency of their own. The agency is called Happy, and the men are Praveen Das and Kartik Iyer who were creative directors for O&M earlier. Kartik spoke, and did he leave an impression on every mind there or what! They bagged the Lee account within the first two months, and their work is just so cool!!!

Life outside of campus was dull. There was nothing to do at the guest house. I did click a few pictures on the last day though. 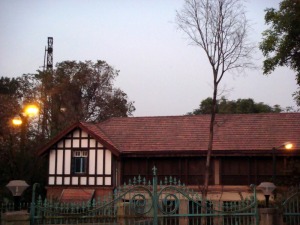 Yours truly
On the way back, I saw the Pune Jail in Yerawada. One beautiful structure it was! The flight back home got delayed a little too, and I didn’t have the super-pilot of the previous journey, so it took two hours only. Actually, it was the turbulent weather that caused the delay. And I was moving above the clouds. Saw the Mumbai-Pune expressway and the Arabian Sea (I’m guessing) from the plane, but could not see a spot of Rajasthan because of the clouds. It was all white outside.

It felt so cool keeping the focus of my camera at infinity
Also saw the Select City Walk mall, Saket from up there. The moment I got off the plane, the wind hit me and welcomed me back home. It felt sooo nice to be greeted like that, but now I wish that I was in Pune (only for the weather). It’s frikkin’ cold here! But it’s good to be back home.

19 thoughts on “Five Days of Drama”