Skip to content
Sometimes it is hard to differentiate between real and surreal. There is a conflict between what you want to believe and what you should believe.

Dr. V.V.R. Sastry taught us marketing in semester I and II. In the third semester he is taking brand management classes. Unfortunately, it is not the entire 30 hours of the module that he is taking thanks to a damn permanent faculty the college has got for the subject. I have mentioned several times earlier that marketing has been my most favourite subject so far. It is so purely because of this man. He must be at least 60 years old, but the dynamism that he brings with himself is absolutely incredible! To me, he is the god of marketing. Kotler’s book has never had the Bible status in my mind because I have had god directly talking to me.

I do not want to compare the new in-house faculty with him, but am forced to because every time I sit in her class I feel I am just wasting time. It takes a lot to kill anything associated with branding. But this woman does it with finesse. I can’t believe she is doing 2/3rd of the course!

So, Dr. Sastry took his first class yesterday. I was S U P E R excited. And so were a few other people who can appreciate good things in life. (And some admitted to ‘eating their words’ later for not realising sooner how great the man is. :P) I sat in front, made notes, and felt happy! The class was brilliant. In Robin’s words, it was our weekend bonanza – the perfect close to the week! 😀

Now comes the surreal bit.
It being a Wednesday evening, many people had plans of going down to Shree for dinner and drinks. A couple of friends were proactive and asked Dr. Sastry himself to give them a ride till the foot of the hill. And they sat in his car! When I reached Shree an hour later, this is what they had to say: Sastry said to Robin, “the girl (me) sitting next to you in class is intelligent. I remember her from last semester’s presentations.”
I tried confirming this 20 times. They could very well be taking my case because everybody knows that I am obsessed with the man. But they’re maintaining their stand even till this moment. Now either they’re being cheap by not admitting that they were kidding, or are actually saying the truth. It is too unreal to be true, too perfect for me to believe, more perfect for me to not want to believe, and I do not know what to do about it!
It makes me happy even if my friends are making it up. But I swear I cannot express what it would mean if it were true and there was some way of validating it! Guess I’ll keep obsessing about it for the rest of my life. After all it’s god we’re talking about!

Got bored of the blog’s look, so shuffled the colours a little. I like the brightness. Would like to know what you think of it too. 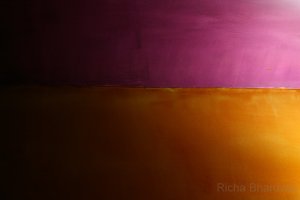