From a happy and fun Saturday, to a messed up Sunday, and an aimless Monday… I’m riding a strange ride every day. Taking each day and each moment as it comes has never meant more to me. And for somebody who’s a planner by nature, trust me, it’s not a funny game. But the rules say that I can’t complain, so I’m trying to keep that at bay.

Let’s talk about the Monday. Got out of bed quite late as usual, moved about the empty house for a while as usual, fixed myself some breakfast after noon, and then got a message from a friend that she was coming over. Reason enough to GET UP and clean things around. The room and the self, both. Some fun as expected, and a Fun Flips + Sprite party! Fun Flips are still for five bucks! They were selling at the same rate when I had my first class party in school. Anyway. After a couple of hours, an idea struck. One reason why Sunday was a mess was that I was not able to go out for a shoot. I badly wanted to. So we thought that we’ll please the restless soul today. And we (that’s just me, btw) headed towards Humayun’s Tomb. I’d been there once before – again, for the first class picnic, I think. All I remembered of that place was mosquitoes and flies in the lawns.
But, it is one of the most beautiful places that this city has. Without a doubt. Better than Red Fort, Qutub, and all of that. Very well maintained, and a delight to look at. I spent about 1.5 hours in the complex, and then too it was my camera’s battery that told me that we should leave. I was literally happy-jumpy on my way out of the place, caught an auto and headed home in the chill.

On days that I do the above mentioned, the rest of the time is spent in front of the computer, going over and over and over all the pictures. So I have been doing that for hours now. The fun element of it is hard to explain.

Today, I am also listening to Rainbow at 1:00 a.m. after a very long time. It only used to happen in the good ol’ days prior to exams in college. Amiya might want to vouch for that. 😀 Now I don’t know if those days were good or are old, but that was also another fun element in the then boring nights of development economics.
But man, 102.6 and 104.8 are playing some incredible music right now. Billy Joel, Hoobastank, Nickelback, Bon Jovi, Starship, the list is going on and on and on. I’m having fun. Indian Ocean and Jhini were being fun in the afternoon too. 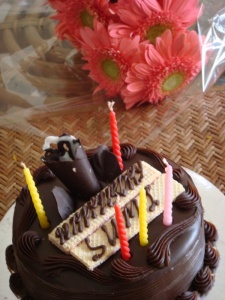 Shall wind up now. There isn’t even much to write anyway. Leaving with a picture that I clicked today. Could not relate to it any more at this point in life, but I think it’s something that always holds true.

Life… is a long and bumpy ride. Gotta keep moving!