Skip to content
This campus is becoming crazier with rules with each passing day. And if I have started feeling suffocated, I cannot imagine what people who do not believe in following rules must feel like.

So, this post is about the little time I spent out of the jail-like environment recently.

I guess I should cut out the ‘it was difficult to make this trip happen’ bit from my posts this travelogue onwards. They all seem to be highly difficult and almost impossible because of the issues that come up at friends’ ends. Every time I end up deciding that I’d go alone if that’s what it takes to travel. Every time I end up almost cancelling because it’s not safe to travel alone. And so on.
So, this routine happened this time too. I wanted to go to the beach that I had mentioned in my Ajanta-Ellora travelogue – Srivardhan. It had been due since February. Swetha, Ridhima and I had even gotten onto a bus to the beach during the first week of this semester, but it was not meant to work out that time, and it didn’t. And that episode had made me even surer about it – no way I would have gone too long without seeing the place!

At 11:00 p.m. on the 30th of June, I was sitting with 20 tabs about the place opened on my laptop, a permission letter to be out of campus the next night, and no friends to accompany me. 30th was anyway one of the crappiest days in a very long time. I was homesick, lonely, depressed, and sick of a lot of things around me. One last attempt at asking a friend worked. There was a sudden development at her end, and she could take out that one day to come with me. Then a 3rd one also agreed. Her roomie followed suit, and we were four of us ready to get going. Priyam and Ankita are the ones I went to Ajanta-Ellora with last term. Swetha, I’m sure you all know by now. I was happy I had company. I was happier that I had perfect company. At midnight we booked a cab for 5:00 a.m. We were going to take a 6:00 a.m. bus from the city. This time from the Swargate bus station. 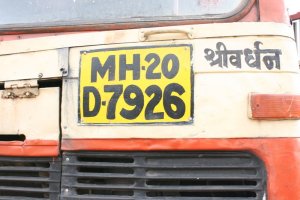 We had spicy idli sambhar for breakfast here

At our first pit stop near the Mulshi dam

Priyam clicked too many such shots of Swetha and me

The bus was to take about 5-5.5 hours for this virgin beach which is close to 150 kms from Pune. The route taken was via all state highways which had the most picturesque landscape ever! I live on a hill, but still managed to get impressed by other hills around. The rocks, the rivers, and the rains.. it was too pretty! There was a patch in between where it felt like we were driving through a grove ‘coz there were pretty trees with a nice shade on both sides of the road. Then there was another patch where there were rocks on both sides even though it was not a tunnel. It was superb! I can’t believe people were sleeping through all this. I mentioned this to my friends, but I have to register it here too: I never knew the wild could turn me on the way it did this time. It was a little funny, but interesting to imagine. 😛

One of the bus stops on the way 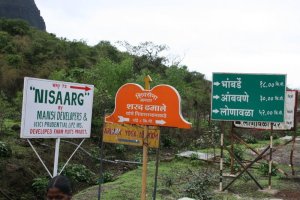 View from my window seat on the bus

It started raining when we were just about 10 kms away from Srivardhan. I didn’t like the sight too much since I did not want my plans of spending time on the beach to get fucked because of rains. But it did rain heavily for quite a while. Apparently it was the first day of the monsoons in that area. Till the time it rained, we found ourselves a nice, MTDC-approved hotel to stay in. It was affordable and clean. Didn’t need anything more. We clicked a few pictures, changed, and stepped out for lunch. 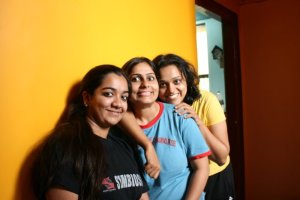 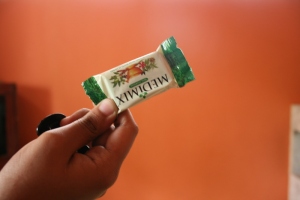 All hotels/restaurants/public washrooms seem to have Medimix nowadays. Good marketing! 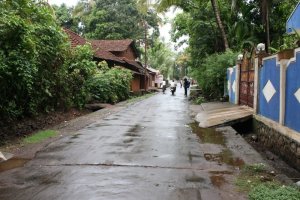 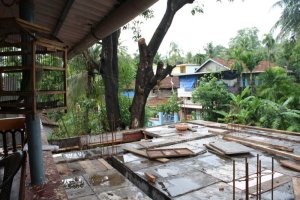 We had lunch in this under-renovation restaurant

Three out of the four of us were photography enthusiasts, and the fourth one was an extremely patient woman. We’d taken our cameras out with us, but the rain was getting too scary for us to be experimenting too much. So, on our way to the beach, we left our cameras back at the hotel. We planned on coming back and taking them if the weather cleared up since the hotel was barely 300-400 metres away from the beach.

The road to the beach 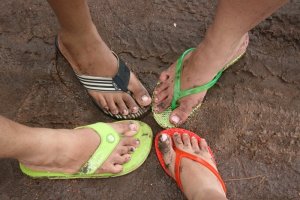 Bara was discriminated against for having worn black & white chappals

The rain did stop for a while. As we approached the beach, the sound of the waves was the most intoxicating thing that had happened to me in a while. Please note that this was the first time I had gone to a beach. So you can imagine the level of excitement that I was experiencing. Within 2 minutes of being there I figured that I am totally a beach person. Hills are nice, but the water is bloody exciting! Although, I will have to admit that I am equally afraid of height and water. In fact, being in water wasn’t just scary, it was making me kinda sick too… but that was only initially. Of course, my dear friends found it absolutely hilarious that I felt I was moving with the waves. And it was even funnier when I once did almost get taken away by the waves.

Anyway. There was nobody on that beach except the four of us through the entire afternoon. There was just a creepy man in a green jacket who seemed to be noticing us from a distance. He left only when a few more people/families started coming in towards the evening. We were on the beach from about 2 p.m. till 7ish. The last hour or so was spent clicking. Rest of the time I sang songs from Dev D (for no plausible reason) and annoyed the girls, noticed little crabs fool around on the beach, got informed about the difference between white sand and the dark, fine sand that this beach had, played with the waves, got a lot of sand smacked at me, and did poetry for the first time in five years!! Like I mentioned, I got hit hard by one of the waves too. Bloody hell, it was the saltiest, most scary feeling ever!
I also felt like going away into infinity with the waves. Nature does that to me. It stirs the deepest, most hidden emotions inside. That’s why I also avoid sitting by the edge of the hill on my own. Or staring at the sky for too long. It’s a strange, calm, yet unsettling kind of feeling. It is not quite sadness, but it almost feels like it. I don’t know how to word it better.

But I was not going to let myself get carried away with those feelings. I was there to enjoy myself, not to distance myself from the world. And once we got clicking, nothing else mattered anyway.
The only sad bit was that there was no sun. I did not get to see the sun setting. I did not get to click it by the horizon. There was no drama in the sky either because of the clouds. And that was such a letdown!! But I still had fun ! 😀

I was having fun. 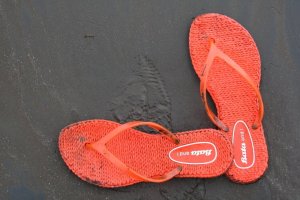 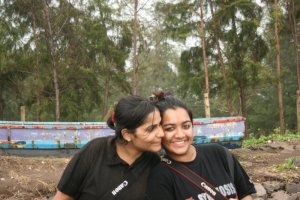 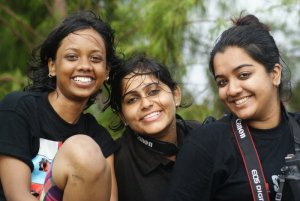 Fishermen and other men 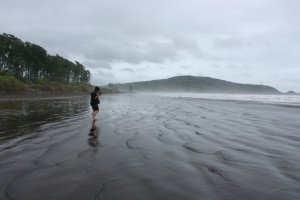 We also managed to have some bhel puri and vada pav by the beach in the evening. And by the time we got ready for dinner, it was 8 o’ clock. Since it was a small place, it was almost dead by that time. We were almost killing the silence through the streets looking for a place to eat. A man in a market-place suggested that there’s a good restaurant close-by and that we should definitely eat there. It turned out to be the crappiest place with the most horrible food ever. But all of us were too exhausted to bother too much. We just ate, came back, and crashed on our respective beds. I hear though that Ankita watched a couple of K-serials before going to sleep. After all the hotel had provided us with TVs that had cable!

All four of us back at the hotel

Our bus back to Pune was at 5:00 a.m. So a 4:15 a.m. alarm, a heavy rainfall morning, and a sleepy 5.5-hour journey later, we were back in Pune. We spent the morning in the city, and took the 2 p.m. bus back to campus.
It was also a day to celebrate Delhi High Court’s verdict on gay rights. Was soo happy for a few friends in particular!! So the evening was spent at Shree with rum. The alcohol led to a different kind of intoxication and fun. 😛
And I had the two most perfect days of the term! 🙂 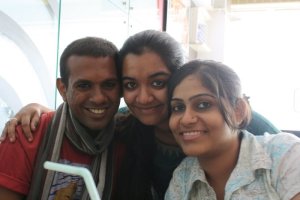 Lunch in the city

Details of the travel:
# State buses from Pune to Srivardhan are not too frequent. Only twice a day from Swargate – 6:00 a.m. and 3:30 p.m. Similarly from Srivardhan to Pune too.
Fare: Rs 117 for an ordinary bus, and Rs 140 for a semi-deluxe one. But you don’t get to choose.
Just that the bus will be kinda slow ‘coz it’s supposed to be a local bus for the locals of all the villages it passes through. So it stops too often.

# From the bus stop to a hotel/the beach: 3o bucks for the auto.

# We stayed at the Sagar Darshan Hotel. It was the closest to the beach. Rs 400 for a double-occupany room, and Rs 700 for a 4-bed room. But these are off-season rates. The off season is from June 15 to September 15 – essentially the monsoons.

# Sea food is supposed to be good there. I thought standard,vegetarian was fine too. Except at Hotel Prasad close to the police station there.

We spent less than Rs 800 per head for this day trip. Just the thought of it gives us such a kick because it’s not like we tried too hard to cut costs. And an amount like that gets spent even if we decide to go to the city, watch a movie, have lunch, and come back. 😀