The schedule for the semester said that September 3rd and 4th will be holidays. Several weeks in advance I started talking about moving out of Pune for the two days. After much contemplation, we decided that it won’t be too good an idea to go because it is festive time here in Maharashtra and the streets are a little crazy with celebrations and frenzy.

So it was decided that 2nd night will be a party. The only condition I laid down was that there has to be dance. The onus of deciding and planning everything else was on friends. Poor things brainstormed on minute details like mad for days. Surprises were also being planned, and I was being made to eat alone at the mess while the secret stuff was on.

What was also happening (of things I knew about) was a wardrobe makeover for yours truly. First she bought a fancy top for which she thought a Mr Chopra will be decent company in helping to decide. But turned out he didn’t know how to help women shop. So the coordinators of the event – Ridhima HI! Mehra and Swetha Bijli came to my rescue and we bought something pretty.

Then a couple of days later Ashraf and Nidhi helped me shop for a skirt which was ‘very-unlike-Richa’. But “cute” (as everything I will ever own or do in this lifetime) it was, and a 40% discount it had, so we merrily bought it.

Here comes the afternoon of 2nd September and the notice board says that Aarbee along with three other party members were required to report in the office at 8:00 pm for an interview. So the cab will come later and we will have lesser time to funjoy. Nonetheless, finally after a LOT of continuous planning we left campus at 9:45 pm. Two cars loaded with 14 people headed to the city which was apparently choked due to rain and traffic. It took us about a very eventful one hour to reach an area called Kalyani Nagar and there we figured that things are going to be shut within minutes and we have no place to eat, drink or DANCE. Happy to me! Not even Comesum at the railway station was an option because there were drunken men all over the place anyway. And there were thullas too who would not have allowed 10 of us to be in one Tavera. Only one place had lights on at 11:30 – McDonald’s. We go and loot all that their kitchen had left in it. Not enough for all of us, but we make do. I started feeling better because I felt I was turning 13 or something, not 22. A yummm chocolate truffle cake arrived and also began a flood of phone calls. There went the routine followed by a wise decision of just coming back to campus because there was NO place to go to in this students’ city.

You know who was torn between feelings of being happy that there are 14 other people trying to make her day exciting and of being sad because of the fact that one of the gods decided to steal her thunder.

So we just played blaring music in the car, sang out loud, stopped over at a dhaba to get some proper food, and were back on campus at 2:00 am. The dance HAD to be there and we were lucky to have Bappi da with us on Ranjan’s phone. So we walk-danced from the academic block to the hostels on the tunes of Yaar bina chein kahan re and so on. Akash, our techie cameraboy was playing Shashi Kapoor for the night and made sure we laughed like crazy.

After further madness and realisation that we did not have alcohol for the girls on one of the floors (automatic, natural dry day for MY floor), we just called it a day and five of us came to my room while the others went to their respective hostels and rooms. My birthday had just begun, so the surprise was waiting for me to change into pyjamas. It was a video full of wishes and love that all these guys had recorded and edited for me. Now that was something I had never been at the receiving end of. So I smiled through the 20 minutes of footage and as usual was left with no words at the end of it. And so I smiled further. =)

At 4:00 am we NEEDED sleep, so everyone went off. I don’t know when I got sleep because I started answering phones again at 7:00 am. The number of embarrassing calls was the highest this time because most people called on my Reliance phone and that phone has no numbers saved apart from those of the Pune people. So a friend calls and plays the guitar, and I am compelled to ask who it is because I had absolutely no clue about who I was talking to. Some sent some profanities free with the wishes, others just didn’t say anything.

For lunch I wanted pizza and my friends wanted embarrassment for me. So they told the Pizza Hut people that it is my happy to you and they made me stand in the centre (thankfully, not on a chair) and sang a strange happy budday song. The cutest thing there though was a small girl coming up to wish me and giving me her FiveStar. And she genuinely wanted me to have it because she barely took a bite of it when I offered it to her. Darn sweet!

Spent the entire day eating, walking and shopping in the city and came back by the 9:00 pm bus. Also, received and bought flowers. One of the bouquets that I received became a little extra special though. It had travelled a couple of kms less than 2,000 if I am not wrong. It was from a Bong in Calcutta. The one who took note of a mad request I had made on the blog last week. Super-duper happy!!!

By the time I reached my room I was too dead! Still sat and organized all the photographs that were clicked over the past 24 hours. And now writing this too.

But before ending I really need to thank the gang here without whom this day would not have been so special. 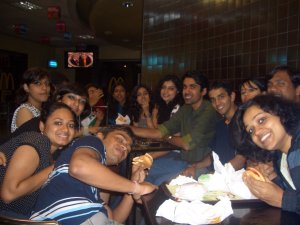 All of us, with Priyam behind the camera 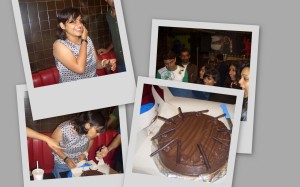 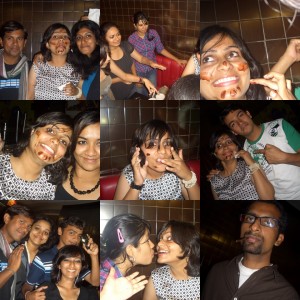 On the way back to campus.

Home was quiet and missed me. Even though I am having a lot of fun here, I hope to go back soon and spend more birthdays there. Love you, Ma, Pa and Bhaiya. Mmuaaah!!